Pay-to-Dig: The Story of Arkansas State of Crater Diamond Park

Crater of Diamonds State Park, located in Arkansas, is the only “pay-to-dig” mine in the world. The 37 ½-acre plowed field invites visitors from all over the world to look for diamonds and keep their finds. Since it became a State Park in 1972, it has proven to be a huge tourist attraction. 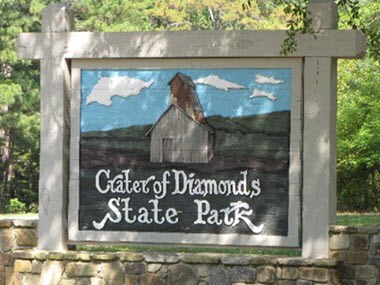 The park is located over an eroded lamproite volcanic pipe and since 1960, diamonds have been discovered in the area. The diamonds found are white, brown and yellow, with white diamonds being the most prevalent. Other non-diamond minerals and rocks are also routinely found, among them Amethysts, garnets, jaspers, agates and quartzes.

According to Arkansas Department of Parks and Tourism, over 75,000 diamonds have been unearthed in the site in 1906.

Here are some of the more notable diamonds found in the crater over the years: